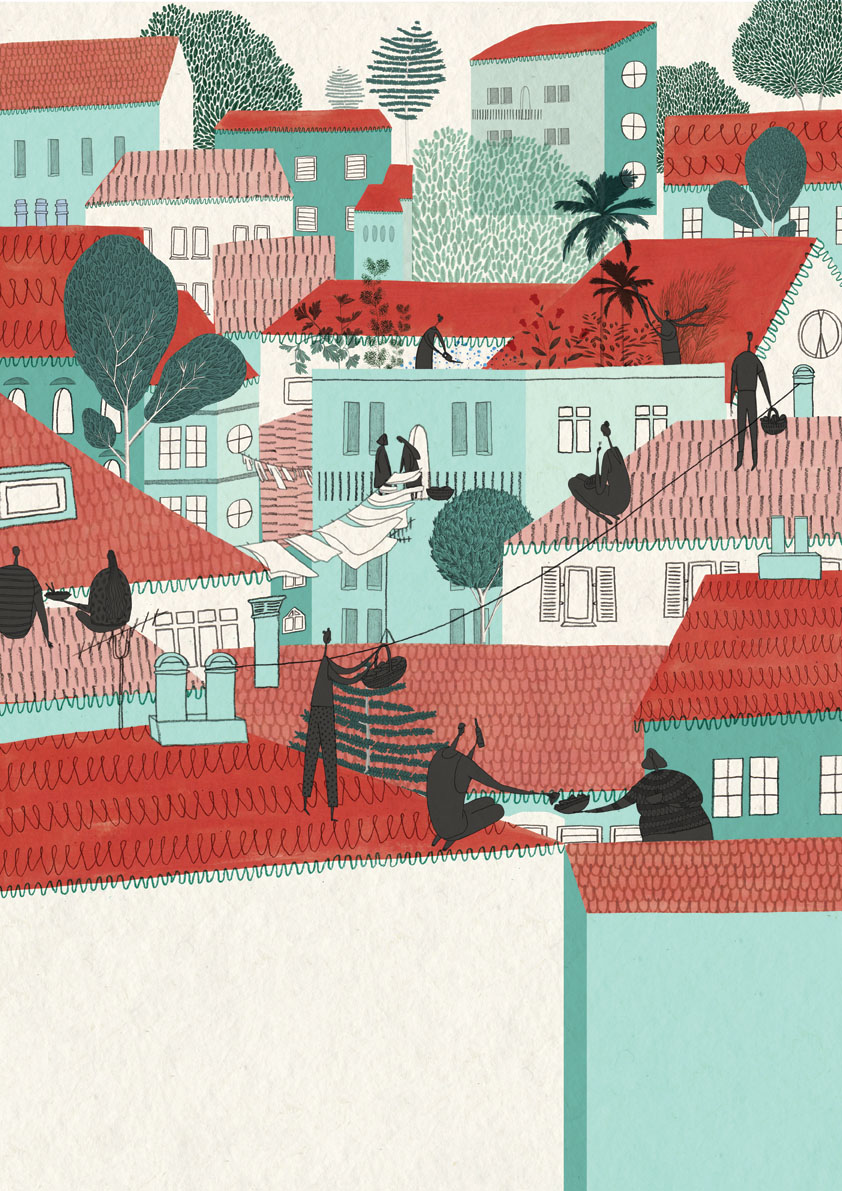 Ed.Note: This is a print first feature published in STIR magazine. You can pick up current and back issues in their online shop here.

Many of us grew up with the game of musical chairs. The music starts and we go round and round. Some dance around with abandon, while others hover over each chair as they pass expecting the music to stop (that was me as a child!). Eventually the music does stop and you, me and the other children would rush to find the nearest empty chair. Invariably one child would end up chair-less or else one of the chairs would be crammed with two bottoms vying for position, one bottom toppling over in a fierce contest.

It is an innocent game that we all enjoyed, even if we didn’t win. There is something primal about the whittling process of musical chairs that brings out the hardcore survivalist in even the youngest of us. Unfortunately, the rules of musical chairs also applies to the present and futures of work, and it is hardly an innocent game. These rules have been devised through our neoliberal policies, and they are brutal. Every time the music stops, someone loses a job to automation. The music stops again, a job has been casualised. The music stops, government cutbacks on services, another job lost. Again, your industry has been Uberised. And again, another financial crisis.

Amid the hyperbole of the futures of work, there is the reality. The real winners are those that benefit from neoliberalism—the large-investment class, the captains of industry, and the oligarchs. The losers are the already marginal and those losing their jobs in this process of musical chairs, one by one. The majority are somewhere in the middle, still playing the game, trying not to get caught off guard without a chair, competing against each other.

Most of us are so busy playing this game, we hardly realise that we must step away to play a different game altogether. This new game we can call the ‘commons economy’, in which one person’s gain is not to the exclusion of the other, but rather considers and nourishes a whole social community and whole ecological system. But first, the ‘used futures’ of work.

The Used Futures of Work

A ‘used future’, an idea developed by futurist Sohail Inayatullah, is an image or idea of the future that someone else created in some other context, but to which we are unconsciously holding on to, blinding us to other more authentic and empowering ideas of the future. An example of this is automation and robotics. We are told that artificial intelligence (AI), automation and robotics will eliminate half of all existing jobs in the next ten years. AI will be as powerful as human intelligence in many areas, and will make much of human work redundant. This view is based on real trends and developments in science, technology and industry, but it is still a used future because it does not challenge the techno-deterministic nature of these visions (e.g. the ‘singularity’) and the way in which it excludes important aspects of social and ecological wellbeing.

Another used future is the entrepreneurship revolution. Social or tech entrepreneurs will change the world, enterprise by enterprise. I love the creativity and passion associated with startups, but there is lack of critical awareness that this is a precarious game, which only some are equipped to play, and that only in rare cases does it challenge or change the neoliberal structures that have created the problems many of these startups aim to address.

The sharing economy is another casualty of co-optation. The sharing economy can transform our cities, mutualise community resources, open up opportunities for skill sharing and non-monetised resource exchange. To be fair, it is doing that. But the idea has been co-opted by multi-billion dollar Silicon Valley platforms like Airbnb, Taskrabbit and Uber, which are, more accurately, a way of commoditising personal assets, skills and resources. Instead of creating relationships and sharing, we seem to be hurling toward the creation of precarious gig economies, where people demand better, faster, and more of everything for less—musical chairs again.

The maker movement has also been turned into a used future. The maker movement is a pastiche of pre-industrial crafters and artisans, grimy industrial-era welders and woodworkers, and post-industrial punks, hackers and designers. But gauging from the media we’ll soon be 3D printing our own underwear, just like the Jetsons, convenience on-demand. This image betrays the very essence of what makes the maker movement transformational: its DIY radicalism, communal knowledge sharing, and upcycling revolutionary zeal.

My preferred future of work is where people are building and working in a ‘commons economy’. A commons economy, in my view, is one that does not create wealth for some at the expense of others. The logic of neoliberalism, and capitalism in general, supports a process of value creation with hidden social and ecological externalities. Somebody, or something, loses. A company produces a shiny and beautiful new phone, but the parts were created by exploited workers in China. A car company comes out with an awesome new model, but the mining operations that produced the metal polluted rivers in far-flung parts of the planet. We are so used to this litany of externalities, climate crisis, exploited workers, and so on, that we have become numb to it.

We live in an era of oligarchy and the growing power of oligarchs. Oligarchy means that those with vast wealth rig the rules of the game so that they can maintain and extend their wealth. In the United States, the 400 wealthiest individuals have more wealth than the bottom 60% of the population, and have over 20,000 times the income of the bottom 90% of the population. Public policy is essentially bought. Combined they have a worth of over $2 trillion (USD). Such inequality is even worse in Russia, China, much of Latin America and South East Asia. Oligarchs use systems of ‘wealth defense’ to maintain their wealth, buying influence in government and other locales of power, and use an army of specialists to help them avoid taxes through offshore tax-evasion schemes. The recent scandal around Mossack Fonseca is merely illustrative of this. If trends continue, more and more wealth will be concentrated into the bank accounts of oligarchs, and more and more industries and service sectors will pop up to serve the luxurious demands of the super rich. This is job creation neoliberal style.

These structures are real and will not go away until we address them through new policy, pro-commons social innovations and social contracts. The future of work, therefore, needs to create new enterprises that create value like any company should, but also work at enabling a structural shift from an externalisation heavy capitalist economy to a commons economy. A commons economy is the reverse of musical chairs—it adds new chairs to the game. When the music stops, a chair is added, another person can join the game. We need a new type of entrepreneurship that could be called ‘structural entrepreneurship’, working within the logic of the commons—each and every one of the pro-commons businesses supports the life enhancing qualities of the whole system, helping the transition to a pro-commons economy.

Emerging Elements of a Commons Economy

The fundamental challenge we each face with the present and future of work is livelihood. At the moment our livelihoods depend on making money within the current system. If we put a down payment on a house, we help a bank create more credit and debt. If we shop in a conventional grocery store we contribute to unsustainable or cruel food production practices.

The way out of this dilemma is to starve the current system of our money and energy, invest our energy and money in pro-commons enterprises, and more radically find ways to decouple ourselves from this extractive system altogether. We then need to form (local to global) pro-commons entrepreneurial coalitions and ecosystems so that value exchange is endogenised and re-circulated within pro-commons business activity. Pro-commons investment systems can further pool money and energy toward its re-investment. In this way, step-by-step, each time the pro-commons economy creates a new job, we add a chair to the game.

The Chamber of the Commons

How do we deal with the Uberisation of everything? We need the ‘internet of ownership’, what is dubbed by Nathan Schneider and Trebor Scholtz as Platform Co-operativism. Platform Co-operativism is a movement to put the emerging types of digital service platforms that are transforming commerce under worker-owned and democratic control. There are platform co-ops emerging in every area. Platform co-ops don’t create new oligarchs, just new livelihoods. Add another chair.

Wealthy societies are drowning in redundant resources, and we can create real sharing economies that help reduce ecological footprints, save people money and create community connections. Shareable, founded by Neal Gorenflo, champions such a pro-commons sharing world. We need models that allow locals to make a livelihood from pro-commons work, rather than a networked and franchised one where one Silicon Valley startup wins the whole game. Anyshare is one example of an approach that allows localised sharing systems.

This is a way of localising material production using the knowledge resources from our emerging global design commons. As Vasilis Kostakis and others argue, “Design global, manufacture local”. When this model matures it can help communities drive the development of localised circular economies to reduce or eliminate waste, make a city or region more resilient in the face of financial and environmental shocks, create local jobs and expertise, and reduce transport based carbon footprints.

We need a job-creating way of doing ‘post-growth’. A post-growth economy refers to one in which the economic growth agenda does not sideline all other agendas, ecological and social, and where growth is framed in terms of wellbeing-enhancing activity. For example, we can create state funded jobs that help businesses and industrial areas to map resource flows and create circular economies. Single businesses may be reluctant to do this themselves because of cost, but it can be state-community leadership that provides the initial resources and capability, which later becomes a shared industrial ecosystem-wide responsibility. Sharon Ede and colleagues are pioneering this thinking through the Post Growth Institute.

Several other core P2P ideas should be mentioned here. First, the Commons-Based Reciprocity License (CBRL) is important. As Michel Bauwens argues, much of the open source economy, because of its openness, ends up supporting corporate capitalism, as is the case with Android software. CBRLs would allow licenses that limit free sharing to other pro-commons co-operatives, endogenising and re-circulating knowledge commons to help build the pro-commons economy. Secondly, Open Co-operativism is key. This means that enterprises build the global knowledge commons even as they build their own enterprises, and can be coupled with CBRLs. Even more ambitious are Open Value Networks, which can allow many contributors to collaborate on the co-creation of a product or service, in a globally distributed fashion.

Beyond all this fancy P2P jargon there are still some very basic realities. Unpaid and reproductive labour is still the foundation of our societies, enhancing this support is the foundation for a commons economy. We still need startups and innovation, and should continue to support the startup revolution, but make sure it is steered in a pro-commons direction. Artificial intelligence, automation and robotics will no-doubt lead to unimaginable breakthroughs in many walks of life, but they need to be at the service of our social and ecological commons. We will continue to need competition and consumer choice in many areas, but will need to distinguish between where competition is good for consumers and where natural monopolies exist. Ultimately, pro-commons policies will need to become part of the fabric of the state, a state which facilitates and supports commoning strategies, what Bauwens has called a Partner State. Creating this will require the commons movement to overcome the political influence of oligarchs, who would rather just hide their fortunes in offshore tax havens, even while the Earth burns.