"Can the extravagance of growth fanatics continue? Clearly not. Will President @realdonaldtrump keep the lemmings racing towards the cliff? Definitely so."

After posting a pretty dour outlook last week we were amazed to watch it attract more page views more quickly than any of our previous 22 posts this year. No accounting for taste, we suppose.

At the risk of alienating our new audience right off the bat, we are posting something more upbeat this week.

We had two scientific papers shoved under our door, and both of are serious sources of hope for a world undergoing climate shock. They represent the two sides of the solution ledger, adaptation and mitigation.

The first is an open research white paper, The Sower’s Way: Quantifying the Narrowing Net-Energy Pathways to a Global Energy Transition, by Sgouris Sgouridis and Denes Csala of the Masdar Institute of Science and Technology, United Arab Emirates, and Ugo Bardi from the Department of Earth Sciences at the University of Florence, Italy.

The second is a journal article, published under a creative commons license in Science Advances 2016, entitled Carbon sequestration potential of second-growth forest regeneration in the Latin American tropics by 60 co-authors at 45 institutions in almost as many countries. The lead author is Robin L. Chazdon, a professor of Ecology and Evolutionary Biology at the University of Connecticut and a visiting professor at the International Institute for Sustainability in Rio de Janeiro.

In The Sower’s Way, Sqouridis’ group looks at the INDPs (national pledges) submitted at the Paris climate conference in December, sees that they are clearly inadequate to arrest runaway climate chaos and near term human extinction (NTHE)) and asks the pregnant question, suppose they weren’t?

Suppose the overarching goal set in Paris — to phase out fossil energy by 2050 or sooner — were actually committed to by all those who exchanged pens at the signing of the legally binding treaty last month at One UN Plaza?

“Is it possible to satisfy the dual constraint of reducing emissions fast enough while achieving the desired energy availability?” the authors ask.

“… [I]mplicit in the COP21 agreement is that these reductions should be obtained while offering sufficient available energy for humankind, especially for developing countries that are ascending the energy availability ladder.”

After completing the study, one of the authors, Ugo Bardi, conducted a poll on the Doomstead Diner   of how realistic most doomers thought the renewables revolution to be.

What is the possibility of a society not too different from ours (but 100% based on renewable energy sources, and on the possibility of obtaining it before it is too late to avoid the climate disaster. This said, what statement best describes your position?

Our own response, after returning from Paris, was: "option 6 – it will be faster than anyone expects.” Our reasoning was that once the curves cross  — and solar is cheaper than oil — there will be a mad rush to dump oil stocks and buy solar, without any consideration of net energy. Simian neurobiology will then be buckled into the driver’s seat, chasing lost investments with fresh money until every last shekel is exhausted. In the end, there will be a lot of solar, wind, geothermal, and tidal energy to show for the effort but just not anything resembling the consumerist civilization most people now take for granted.

There will not be Space Cadet academies on Mars. 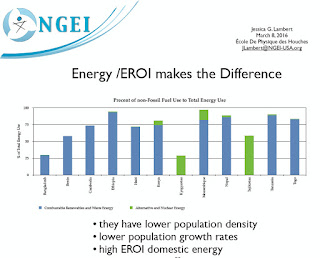 The Sqouridis paper concludes that “renewable energy installation rates should accelerate and increase at least by a factor of 50 and perhaps more than 90 over current” in order to meet the UN sustainable development goals. They conclude that growth rate is entirely possible and may already be in process. The key, they say, is “the sower’s strategy”:

“… the long-established farming practice to save a fraction of the current year’s harvest as seeds for the next. Fossil fuels produce no “seed” of their own but we can “sow” what these fuels provide: energy and minerals to create the capital needed for the transition. Yet, withdrawing the “seed” energy reduces net available energy for society. The challenge therefore is to balance energy availability and emissions in order to complete a renewable transition before fossil fuel depletion makes it impossible without inflicting crippling damages on the climate.”

Moreover, to be rated a success, the solar power transition has to meet three criteria: 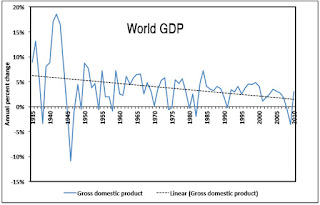 In every case, a successful SET (sustainable energy transition) consists of a sustained acceleration in the rate of investment in renewable energy of more than one order of magnitude within the next three decades following a trajectory dictated by the chosen fossil-fuel phase-out. A peak in installation rates, but not cumulative capacity, forms at the point where the rate of energy demand growth starts to slow down.

In other words, the group concluded that Option 6 was the most likely: it will be faster than anyone expects. At least 50 times faster than it is right now.

Meanwhile the seminal bioeconomist Charles A. Hall reminded us:

There are three good studies — Mohr et al.’s 2012 (Ward, J., S.H. Mohr, B. Meyers and W. Nel. 2012. High estimates of supply constrained emissions scenarios for long-term climate risk assessment. Energy Policy 51: 598-604); Maggio and Cacciola (Maggio, G., and G. Cacciola. 2012 "When will oil, natural gas, and coal peak?" Fuel 98: 111-123); Laherrere’s ASPO-France web page —  that agree that there is likely to be a peak in ALL fossil fuels in +/- 2025 and then a sharp decline. It seems extremely unlikely that renewables will fill that gap. On the other hand the near cessation of economic growth in OECD countries and the slowdown for China might smooth out and slow down our approach to the peak.

With that opening salvo, we can see Hall’s studies and raise a few more:

Climate change, and more recently, the risk of fossil fuel production being unable to keep pace with demand (peak fossil fuel) are both considered as risks to civilisation, or global risks. In an initial empirical analysis, this paper attempts to answer the following questions, which have often been posed but have not, to our knowledge, been answered empirically at global level. At which date, if unaddressed, will the risks become critical? Given that the substitution of fossil fuels by wind and solar energy is often proposed as a solution to these problems, what is its current aggregate growth rate and is there a plausible future growth rate which would substitute it for fossil fuels before the risks become critical? The study finds that the peak fossil fuel risk will start to be critical by 2020. If however the future growth rate of wind and solar energy production follows that already achieved for the world mobile phone system or the Chinese National Expressway Network the peak fossil fuel risk can be prevented completely. For global warming, the same growth rate provides significant mitigation by reducing carbon dioxide emissions from fossil fuels to zero by the early 2030s.

Thus, whether lured by the carrot of a sun-powered future or frightened by the sound of the dip stick scraping the bottom of the oil pan, a Great Change is coming. But what is the shape of the curve? In comments to our last week’s post, reader Don Stewart wrote:

“Whenever somebody with a decent grasp of maths and physics looks into the idea of a fully renewables-powered civilised future for the human race with a reasonably open mind, they normally come to the conclusion that it simply isn’t feasible.”

We are completely convinced that the above statement is true, but that does not mean that renewables cannot be of significant use to modern society. It is not that they can replace fossil fuels, but they could considerably extend their useful life span. That could be as much as a century. At the world’s present consumption rate the oil age will be ending in 13 years, and society will have to pay a very high price to get it there. We are now witnessing the bankruptcy of the Petro-States,  and much of the Western world’s petroleum industry. Over the next five years it will become very apparent as to what is happening. Geothermal, wind, tidal power, small hydroelectric, and in some cases solar can replace much of the electricity production of the world — electricity that is now being supplied from our rapidly depleting fossil fuels.

Of course clean electricity is not a substitute for fossil energy; nor are biofuels; nor are both in combination. Professor Hall recommends Alice Freidemann’s new book When Trucks Stop Running for a fuller discussion of that issue. Friedemann blurbs:

Our era of abundance, and the freight transport system in particular, is predicated on the affordability and high energy density of a single fuel, oil. This book explores alternatives to this finite resource including other liquid fuels, truck and locomotive batteries and utility-scale energy storage technology, and various forms of renewable electricity to support electrified transport. Transportation also must adapt to other challenges: Threats from climate change, financial busts, supply-chain failure, and transportation infrastructure decay. 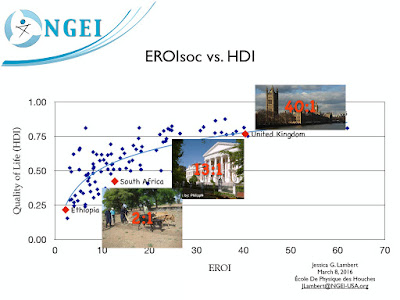 Hall, Friedemann and Stewart all raise a common point: assuming renewable energy was rolled out with adequate speed and with all the boost the last hours of ancient sunlight and fossil energy era technology can supply, is it enough? The answer to that question lies in our civic willingness to face limits, both to the size of the human population and to how much it consumes. Can the extravagance of growth fanatics continue? Clearly not. Will President @realdonaldtrump keep the lemmings racing towards the cliff? Definitely so.

Chazon’s 60 scientists looked at something entirely different. They asked the question, what if we let nature be nature? Would she recover? Would she do so in time? The answer, which is really quite shocking given what we presented here last week, is yes. We have only to step aside. 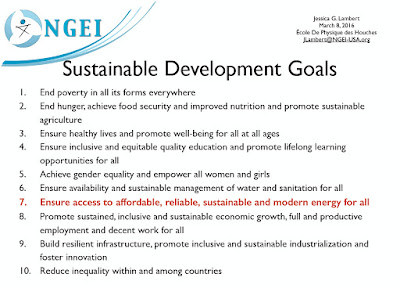 Chazon, et al, noticed that although deforestation in the world’s tropical regions, owing to expansion of cattle farming, urban sprawl and fire, continues to reduce overall forest cover, second-growth forests (SFs) are expanding in many deforested areas of Latin America. SFs emerge spontaneously in post-cultivation fallows, on abandoned farms and pastures, in the understory of ecological restoration plantings, and following assisted natural regeneration on private or communal lands. Given that there has been good satellite telemetry for more than 4 decades, Chazon’s group asked,

“What is the total predicted carbon storage potential of naturally regenerating forests over four decades across biomes and countries?” 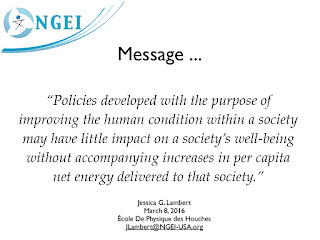 Only about 28% of the millions of hectares studied was second growth forest, but looking carefully at that part, the researchers concluded that if second-growth forests were permitted to recover, unaided by tree planting or other interventions, 8.48 gigaton of carbon would be net sequestered over 40 years just in the aboveground biomass. Calculating below ground carbon they say would add another 25% (although we think that is too low). Their number corresponds to a total sequestration of 31.09 Gt CO2, equivalent to emissions from fossil fuel use and industrial processes in all of Latin America and the Caribbean from 1993 to 2014.

Just imagine what could be achieved with the addition of step-harvesting of forest products and biochar from woody wastes — or if we just left alone the other 90 percent of the planet that would naturally revert to second-growth forest if were allowed to. In either of those scenarios, so much carbon would be sucked out of the atmosphere that Earth’s atmosphere could quickly recover to pre-industrial greenhouse gas levels in a time far short of 40 years.

Suicide is not the only option, as the volunteer on the other end of the hot line will tell you.

There are still choices.

Of warnings and their ripple effects