A roundup of news, views and ideas from the main stream press and the blogosphere.  Click on the headline link to see the full article.

Here’s what it would take for the US to run on 100% renewable energy
David Roberts, Vox
It is technically and economically feasible to run the US economy entirely on renewable energy, and to do so by 2050. That is the conclusion of a new study in the journal Energy & Environmental Science, authored by Stanford scholar Mark Z. Jacobson and nine colleagues.

Jacobson is well-known for his ambitious and controversial work on renewable energy. In 2001 he published, with Mark A. Delucchi, a two-part paper (one, two) on "providing all global energy with wind, water, and solar power." In 2013 he published a feasibility study on moving New York state entirely to renewables, and in 2014 he created a road map for California to do the same…

Here’s how it looks: 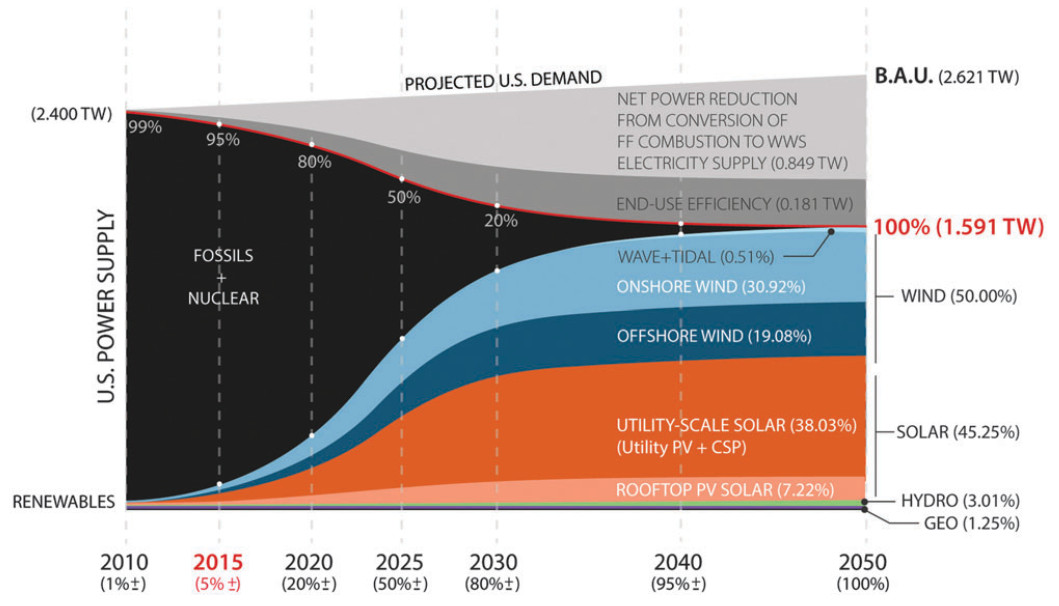 No one can say any longer, at least not without argument, that moving the US quickly and entirely to renewables is impossible. Here is a way to do it, mapped out in some detail. But it is extremely ambitious. Let’s take a look at some of what’s required…

Fossil fuel divestment is rational, says former Shell chairman
Damian Carrington, The Guardian
The former chairman of Shell has said that investors moving their money out of fossil fuel companies is a rational response to the industry’s “distressing” lack of progress on climate change.

Sir Mark Moody-Stuart, who spent almost four decades at Shell and rose to be its chairman, also said the big oil and gas companies had been calling for a price to be put on CO2 emissions for 15 years but had done little to make it happen.

His striking remarks are the most supportive of divestment made by any senior figure in the fossil fuel business. They will also be chastening for Shell. The company is currently positioning itself to be part of the solution to climate change rather than part of the problem, but faces criticism of its Arctic and tar sands operations…

‘Big oil’ split over climate-change risk as Paris talks loom
Andrew Critchlow, Daily Telegraph
One scene stands out more than any other from the Opec International Energy Seminar last week, which attracted the cream of the global oil industry’s executive leadership.

When the audience of well over 300 delegates, gathered in Vienna’s splendid Hofburg Palace, were asked in a show of hands whether they believed that the Paris Climate Conference talks – also known as COP 21 and due to be held later this year – will achieve a binding agreement to limit global warming to below 2C, no one in the room raised a glove.

It was a remarkable and quite depressing response from the industry – given the growing attention that world leaders, including the likes of US president Barack Obama – are now giving to climate change and the scrutiny that fossil fuel producers are under to persuade them to confront the issue.

However, the industry itself is divided over what the appropriate response should be to COP 21 and the growing clamour among campaigners to encourage large institutions to disinvest from fossil-fuel producers. On the one hand, oil companies and coal miners must continue to invest heavily to produce resources which are expected to remain the main drivers for global growth for years to come. But they cannot afford to do nothing and then face all the blame in 20 years’ time should the worst fears surrounding the climate transpire. Oil producers don’t want to become the tobacco companies of the future and be faced with a potentially limitless compensation bill for wrecking the environment…

They announced this move in the FT in the same week as OPEC meets in Vienna to discuss increasing output and amid continuing speculation about the low, volatile oil price.

It is the first time that oil majors have banded together and come out so strongly in support of the international climate negotiations – which makes them appear concerned and rational, acknowledging that climate change is a situation worth acting on…

Wasted Energy
Alan Neuhauser, US News
The federal agency charged with predicting the nation’s energy future is hamstrung by its attempt to remain objective.

These predictions are made by the Energy Information Administration. They are ostensibly apolitical, certified with a federal seal of approval and are ripe fodder for the journalists, analysts and government agencies responsible for painting a picture of the country’s energy future.

But in truth, some experts say, we’d have better luck calling Miss Cleo…

Norway Will Divest From Coal in Push Against Climate Change
John Schwartz, New York Times
Norway’s $890 billion government pension fund, considered the largest sovereign wealth fund in the world, will sell off many of its investments related to coal, making it the biggest institution yet to join a growing international movement to abandon at least some fossil fuel stocks.

Parliament voted Friday to order the fund to shift its holdings out of billions of dollars of stock in companies whose businesses rely at least 30 percent on coal. A committee vote last week made Friday’s decision all but a formality; it will take effect next year…

Going for gas: the risky strategy of world’s largest companies
Karel Beckman, REnew Economy
They are the biggest companies in the world and they are making a huge bet: they are staking their – and our – future on natural gas. At the World Gas Conference in Paris, the major oil companies all avowed their belief that gas will be the world’s “fuel of choice”, because it is “the cleanest fossil fuel”, “abundant” and “competitive”. But Karel Beckman argues they are overstating the case for gas. And may even be betting on the wrong horse.

“The question before us today defines our industry and perhaps our society in the 21st Century.” The “question” that Robert Franklin, President of Exxon Mobil’s Gas and Power Marketing Company, was referring to, during a panel debate at the World Gas Conference in Paris (1-5 June), was that of “how to meet the world’s energy demand while reducing the risk of climate change”. The answer to both sides of this question, he said, increasingly was: natural gas.

Franklin was not alone. At the 26th edition of their triennial global gathering, the gas industry made it abundantly clear that they believe gas is the foremost solution to the world’s energy problems. One CEO after the other sang the praises of what Gazprom lovingly calls the “blue fuel”… 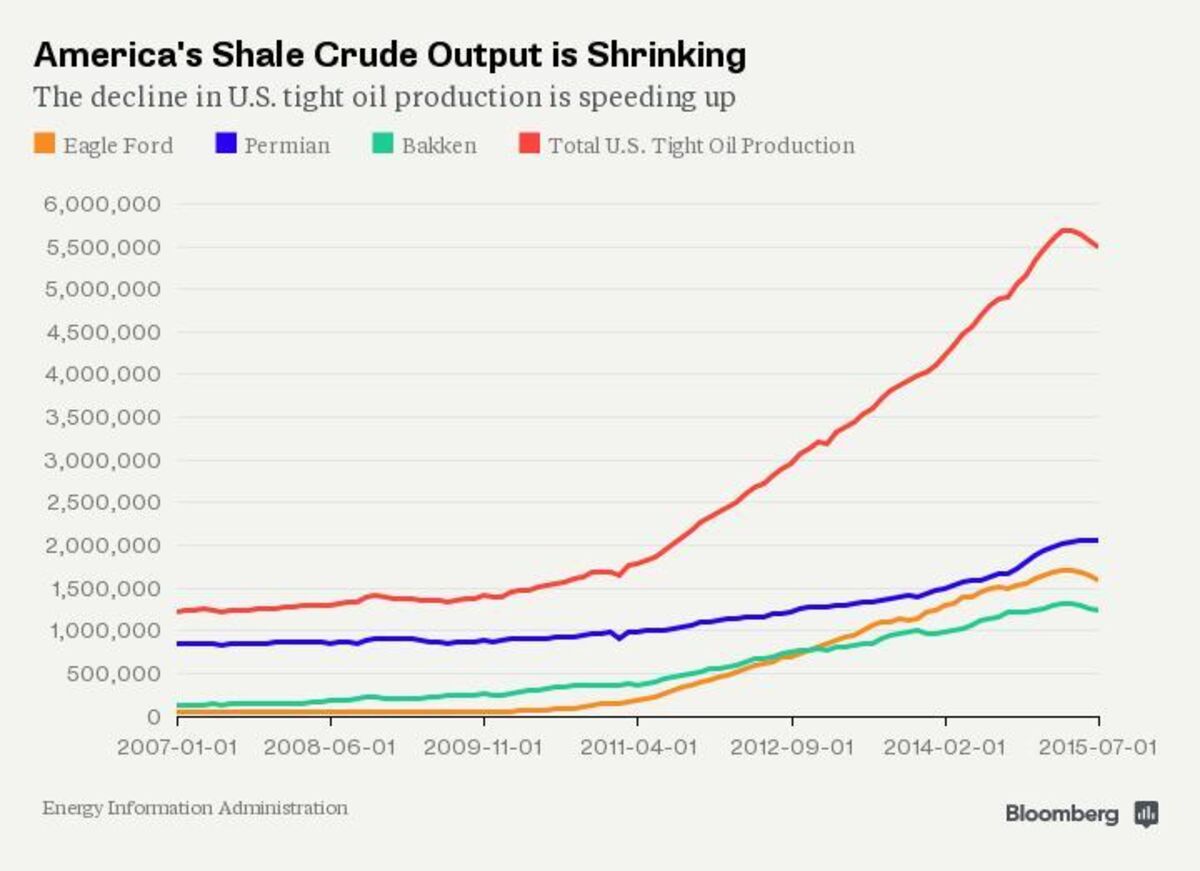 The shale oil boom that turned the U.S. into the world’s largest fuel exporter and brought $3 gasoline back to America’s pumps is grinding to a halt. Crude output from the prolific tight-rock formations such as North Dakota’s Bakken and Texas’s Eagle Ford shale will shrink 1.3 percent to 5.58 million barrels a day this month, based on Energy Information Administration estimates. It’ll drop further in July to 5.49 million, the lowest level since January, the agency said Monday…

Can We Really Decouple Living Standards from Energy Consumption?
Schalk Cloete, The Energy Collective
A lot has been written recently about the decoupling between GDP and energy. This decoupling (shown for the IEA New Policies scenario below) is generally viewed as a central part of the solution to the the sustainability problems we face in the 21st century.

Decoupling between economic growth and energy consumption is often attributed to energy efficiency, but in actual fact stems primarily from the general transition to more service-based value creation as economies mature. As an example, the graph below plots energy intensity in the US against the fraction of the economy dedicated to manufacturing (the balance being services), revealing a almost perfect correlation.

Developing nations can therefore be expected to achieve substantial reductions in energy intensity over the coming decades as value creation is shifted more towards services. Developed nations, however, may be at the point where the economy is saturated with services, thus posing questions about whether these nations can further reduce energy intensity at meaningful rates…

Top Republican Donor To Spend $175 Million To Get His Party To Take Climate Change Seriously
Ryan Koronowski, Think Progress
Usually the news that a major Republican donor will be dropping hundreds of millions of dollars on a campaign to influence voters on energy and climate change would make environmentalists worried. But not when that donor is spending $175 million to get Republicans to talk about clean energy and the solutions to the climate crisis.

Entrepreneur Jay Faison founded the ClearPath Foundation in December of last year in part to restore Republicans’ environmental legacy. Tuesday he announced that he will be investing $175 million on a public education campaign that will include a social media and online advertising to get Republicans to talk about market-based solutions to climate change. That includes $40 million through the 2016 cycle, and another $10 million as a seed fund for a political advocacy group. The foundation invested between $1 and $9 million in a few solar energy projects…

The lawsuit was the first in a wave of expected legal challenges to the E.P.A. climate change rules. Legal experts say they expect some of those challenges to make it to the Supreme Court…

The innovators: the Bristol pound is giving sterling a run for its money
Shane Hickey, The Guardian
When his firm was going up against national companies for contracts to manage waste, Jon Free needed an edge to win the pitches. The answer he found was in the sense of community that existed among small businesses like his. By using his local currency, the Bristol pound, he saw companies were more willing to give their business to him and keep money flowing in the area. Launched almost three years ago, the community currency aims to keep money circulating among independent retailers and firms by encouraging people to use the local ‘cash’ instead of sterling, an idea that has inspired other towns and cities to take up similar schemes in the UK and abroad. “To be able to drop in and create a link to make [the money] a circular thing is a big part of it,” the managing director of Waste Source said. “To say that we are registered with the Bristol pound shows that we are more community based.”

The reality of extinction can be hard to communicate to those disconnected from nature, so artist Louis Masai brought it to their urban landscape. Painting huge, vibrant murals of threatened species around London, Masai shows the power of the image to re-engage.