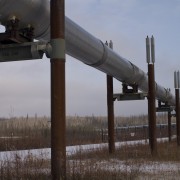 The article below is an excerpt from the forthcoming book Sharing for Survival: Restoring the climate, the commons and society, due to be published early in the New Year. The book originated with the Feasta Climate Group in Britain, and is edited by Brian Davey with chapters by Richard Douthwaite, Justin Kenrick, Laurence Matthews, Nick Bardsley, John Jopling, James Bruges, Caroline Whyte and Brian Davey.

Among other subjects, it explores the idea of adopting a commons-based system for addressing climate change called cap and share. Under this system, fossil fuel producers would have to buy emissions permits which would be administered by the “trust or cartel” that is mentioned towards the end of the article.

In a widely-circulated article in September 2011, Chris Skrebowski, who runs a peak oil consulting firm and was editor of the Petroleum Review for eleven years until 2008, argued that there are two forms of oil peak. One is, or will be, caused directly by depletion – the oil is no longer in the ground in sufficient quantities for producers to be able to maintain production. The other is the economic oil peak, which he says is the “price at which oil becomes unaffordable to consume and therefore to produce.” He says that oil becomes unaffordable when the “cost of the supply exceeds the price economies can pay without destroying growth at a given point in time.” In other words, the unaffordable limit is passed when extra cost of the oil after a price increase captures all, or more, of the increase in income that the growth process seemed likely to deliver.

He cites a study by an international firm of energy consultants, Douglas-Westwood , which shows that in mature economies such as the US, there is a significant economic impact when oil sells at over $90/barrel. In contrast China can probably sustain oil prices in the $100-110 range. “Various studies have shown a close correlation between sharp oil price rises and US economic recessions with only the dotcom recession of 2001/02 proving the exception that had no oil price component. Indeed a study by University of California-San Diego economist James Hamilton, links oil price spikes to 10 of the last 11 recessions.”

China and India can afford to pay a higher price for their oil because they use it more effectively. Less is used for domestic purposes like running a car and more for actual production. This generates the earnings which could enable India and China to outbid the west. He worries about this because he fears that the two countries will be able to afford the energy to grow their economies but that the western economies won’t and will get left behind.

Skrebowski believes that producers will strive for the $100 price. “On the latest budget projections Saudi needs an oil price of $90-100/b for its revenues and expenditures to balance if it is not to run deficits and consume financial reserves. It is likely that many, if not all of the other Opec members have revenue/expenditure breakeven oil prices comparable to those of the Saudis.”

Producers outside OPEC also need to supply $100 oil to cover their anticipated production costs which Skrebowski says have risen to $87 for projects at the planning stage. He points out that some countries are likely to be able to continue growing for longer than others. In particular, those countries which produce a lot of their own energy will be able to do so because it is the loss of foreign currency and the constant need to replace that currency by sending goods and services overseas that absorbs the extra output that growth was expected to deliver. Internal payments for energy just alter the relative sizes of the components of the domestic economy.

Some components will grow, others shrink. The net result could be a contraction because, in view of the close link between energy use and incomes, we cannot expect overall growth if the energy supply is static or shrinking.

But is Skrebowksi right? Is $100 really is the maximum price for oil and unless this is achieved, all oil production will stop because it has become “unaffordable to consume and therefore to produce?” I cannot believe that this is the case because economies are run to do many other things beside growing such as feeding, clothing and housing the population on a continuous basis.The use of oil makes these supply activities very much more productive. A litre of petrol contains the energy equivalent of 8.9 kwh. A normally-fit man can deliver about 75 watts an hour, giving him a total energy output of 3 kwh in the course of a 40-hour week. In other words, a litre of petrol has the same production potential as three weeks’ hard manual work. This makes oil extraordinarily valuable and its use will not be given up easily, particularly as, since a barrel of oil contains 150 litres. $100 seems far too little to pay for the equivalent of 450 hours of human work.

The problem Skrebowksi anticipates is a re-run of the events after the 2008 oil price crash. There was a lot of spare capacity in the global economy after the crash and many investment projects were cancelled. Investment projects are generally highly energy-intensive so the demand for oil fell and this collapsed the price to about $40 per barrel from its pesk of $145. Most oilfield development stopped at this point but the producer countries continued to pump because they needed the revenue. Rigs were laid up, engineers laid off.

But after a little while, some investments based on low-cost energy began to look attractive and, as these went ahead, the global demand for energy grew, pushing the price back up until the economic price was reached and people began to talk about a “double-dip” recession. At this point the cycle began again. It is important to note that the economic price limit is reached at a lower production level each time the cycle repeats itself because of the producers’ failure to invest in field development when the price was low.

This repeated oil-price-spikes-and-crashes scenario is certainly plausible. What can be done to prevent it so that oil stays available for non-growth activities? Once people see that there is a cycle which repeats itself they will begin to act counter-cyclically, investing in field development and buying oil or oil futures when they are cheap and selling some months later when the price has risen. This will moderate the price fall. But will they accept that the oil price will rise well above the “economic limit” and invest on that basis knowing it can be profitable to make investments in a shrinking economy as well as a growing one? These profits involve capturing the incomes generated in existing parts of the economy rather than bringing forth additional income through growth. The potential for this is considerable. In “developed” economies such as the UK, the US, France and Japan, over 30% of national income has been captured by the financial services sector and it is hard to see what the public gets in return for a much greater sum than that spent on energy. As a result, energy investments based on the assumption that energy prices will rise considerably should be profitable because people are going to want to keep warm and fed, even though the energy required is more expensive than in the past and the cost of buying it erodes their ability to maintain their current lifestyle.

If this is true, we can expect oil prices to rise far beyond the “economic limit” enabling either the trust or the cartel to get a good return from from auctioning their permits. Moreover, as some of the revenue from the sale of emissions permits will go to individuals to partially-compensate them for the higher prices, some to others as the carbon maintenance fee and some for investment in renewable energy production, thus creating jobs, the above-the-limit prices should be affordable.

Essentially, the economic limit is a fiction. The real problem facing the world is to re-structure its financial system so that it can cope with a long-run energy-supply contraction. That needs a discussion of its own.

Time for some optimism about the climate crisis

The supply of money in an energy-scarce world