Wikileaks may have told us what we already knew – that Saudi oil reserves are greatly inflated – but the reports also portray leaders of the highly secretive petro-state feeling “under the gun” as they strive to move their economy away from dependence on oil.

Four diplomatic cables made public earlier this week, reporting meetings between Saudi oil officials and representatives of the US between 2007 and 2009, have generated headlines that reserves have been overestimated by as much as 40 per cent. But taken as a whole, the documents are particularly interesting because they show leaders of both nations know “sufficient challenges” lie ahead. The Saudis appear increasingly fearful of the future – in turn, unsure of their ability to produce enough oil to maintain the price system, concerned about a runaway market for oil that does not follow the economics of supply and demand, and then worried about their own lack of diversification into other areas. Between the lines you can sense the growing dilemma: having to deal with the increasing costs of flushing oil out of mature fields just to keep in the game and the expenses of a ballooning, energy-hungry population, while all the while they would rather be investing in new industries – not to mention agriculture – that can take the kingdom into a sustainable future.

Over this period the Saudi officials go from worrying about other people’s demand destruction to asking for US help moving their industry away from oil dependence. That’s quite the turnaround.

As those that deny the importance of the releases strive to point out, suggestions of hyped reserves are nothing new. The late, great Matt Simmons had been saying just that ever since the 2005 publication of Twilight in the Desert, which despite occasional bursts of hyperbole cited an array of incontrovertible engineering reports. Yet anyone denying the importance of this Wikileaks information must overlook both the both the level of detail and the theatrical timing of their release – coinciding with Egyptian demonstrators overthrowing their own dictator, speculation over what is the next Middle Eastern domino to fall and recriminations about US intelligence failure regarding the region. The markets are jittery enough about oil supply as it is.

But first, a look back in time. Taking the cables in chronological order, we first read of a November 20, 2007 meeting between US Consul General John Kincannon and Dr Sadad al-Husseini, recently retired executive vice president for exploration and production at Saudi Aramco. This states:

Al-Husseini, who maintains close ties to Aramco executives, believes that the Saudi oil company has oversold its ability to increase production and will be unable to reach the stated goal of 12.5 million b/d of sustainable capacity by 2009. While stating that he does not subscribe to the theory of ‘peak oil,’ the former Aramco board member does believe that a global output plateau will be reached in the next 5 to 10 years and will last some 15 years, until world oil production begins to decline. Additionally, al-Husseini expressed the view that the recent surge in oil prices reflects the underlying reality that global demand has met supply, and is not due to artificial market distortions.

According to al-Husseini, the crux of the issue is twofold. First, it is possible that Saudi reserves are not as bountiful as sometimes described and the timeline for their production not as unrestrained as Aramco executives and energy optimists would like to portray.

It’s interesting to note that al-Husseini felt demand for oil could only push prices higher, as “recent oil price increases are not market distortions but instead reflect the underlying reality that demand has met supply (global energy supply having remained relatively stagnant over the past years at approximately 85 million barrels/day).” He appears to have seen the 2008 price spike coming.

He also apparently wanted the American leadership to know the full story, and begin to make a transition away from oil:

He stated that the IEA’s expectation that Saudi Arabia and the Middle East will lead the market in reaching global output levels of over 100 million barrels/day is unrealistic, and it is incumbent upon political leaders to begin understanding and preparing for this ‘inconvenient truth.’

The next diplomatic cable in the batch, written about a May 6, 2008 meeting with Prince Abdulaziz bin Salman bin Abdulaziz Al-Saud in the light of runaway oil prices, contains a telling Saudi refusal to open the spigots. “Contrary [to] a few months ago, Prince Abdulaziz promised no relief on production or pricing. He told the Energy Attache that the Ministry was ‘extremely worried about demand destruction’ in the U.S. as a result of the latest financial crisis indicators.”

Next up on Wikileaks is a report following a meeting in June of that year, reviewing that the oil market was not responding in the way that traditional economics would predict through the mechanism of supply and demand. This is because governments around the world are forced to subsidize petroleum costs in the wake of food inflation:

Market analysts in Riyadh point out widespread petrol subsidies in China, India, and the Middle East ensure price feedback mechanisms are broken; they therefore predict crude demand will continue to rise there. Governments are abandoning plans to roll back petrol subsidies in the face of escalating food inflation. Our contacts are concerned languishing refining margins are driving down refinery utilization. Recession may be the one brake on crude prices in the near term, but our contacts are divided on its impact. Their crude price forecasts range between $90 and $150/barrel.

By November 2009 the world had fallen into recession, and the Saudis found themselves “confronting a number of difficult challenges,” according to the fourth diplomatic cable.

While it has managed to weather the international financial crisis, Saudi officials are keenly aware of the need to foster economic development quickly to provide jobs for its rapidly growing population (more than 2% per year). They are also anxious to diversify the base of the economy away from its current predominant reliance on hydrocarbons, which directly provide close to 50% of GDP and indirectly account for much of the rest of Saudi industry. Saudi officials understand the challenges they face, including the need to make Saudi education more relevant to today’s workplace and the need to increase the role of women in the economy, both of which are controversial in the socially conservative Kingdom. Saudi officials are looking to the U.S. to help them meet these challenges, both through increased engagement at the government level, including educational exchanges, and more Foreign Direct Investment, particularly in energy, high tech, and manufacturing. Saudi officials strongly welcomed the President’s Cairo speech and its promise of greater outreach, which provides a good context for your visit.

Saudi officials feel under the gun, as they are aware that a number of other countries are years ahead of them in pursuing the same strategy.

Putting it all together, then, we have the Saudis saying in 2007 that oil “demand has met supply” and prices would climb. When this apparently came to fruition the following year, they were unwilling (probably unable) to increase production, saying this would not work as “price feedback mechanisms are broken.” They clearly link the world’s need for oil-at-any-cost with the soaring price of food. 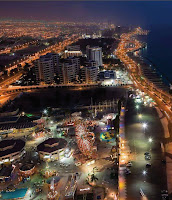 Speaking in 2008, they foresaw a coming recessionary drop in the price of oil, but forecast future prices getting back to $90 – $150 per barrel. By the following year, they felt even this price would not guarantee the kingdom’s future, and actually appealled to the US for investment in “in energy, high tech, and manufacturing” to overcome their reliance on oil.

The Saudis are holding onto a rising balloon, and they know it. Their state is being crushed between parasitical princes enjoying an unbelievably lavish lifestyle and a growing population burning through oil like there’s no tomorrow. The playboy princes lack the wherewithal to lead the transition, while the masses can are now begining to realize that autocratic regimes across the Middle East are not as resistant to change as their own royal family would have them believe. According to Iranian President Mahmoud Ahmadinejad, there is “a new Middle East materializing,” free of the United States and Israel – of course, said while trying to block protest in his own country with house arrests and intimidation.

And it appears Opec cannot pump more oil to take the heat out of the situation. As the Canadian Globe & Mail newspaper reports, “With political tensions in Egypt roiling global crude markets, Opec producers are unwilling to boost supplies until bulging global inventories are reduced, a tough stance that will provide little relief from prices that have hit two-year highs.”

(This report goes on to mention that al-Husseini has been distancing himself from the Wikileaks reports, “saying he was merely distinguishing between proven reserves and the broader category of ‘resources in the ground,’ and that he proved to be wrong in his pessimism about Aramco’s ability to increase production.”)

All this points to an uncertain immediate future for oil prices, according to an insightful report in Foreign Policy. It contrasts two Saudi Arabian oil estimates from 2007: the public statement that the kingdom has 388 billion barrels of recoverable crude oil reserves, and al-Husseini’s private view that “the country’s figures in general are wildly overblown, and that it is headed for a production peak around 2020, followed by a slow decline.” (He actually reportedly suggested “a global output plateau will be reached in the next 5 to 10 years.”) The item continues:

The issue is pivotal. Put simply, the price of oil — the price you are paying at the pump, indeed the cost of everything in your home — is wholly determined by what oil traders think Saudi reserves and production capability really are. As an example, oil plunged yesterday to its lowest price of the year — $87.87 a barrel — when Saudi Arabian Oil Minister Ali al-Naimi suggested that the kingdom will put new oil supplies on the market to compensate for any uptick in global demand.

The question of Saudi Oil reserves, even if we think we know the answers, remains central to our own economies. It’s more than just the physical size of reserves, as the matter includes how fast the Saudis can bring oil to market, and whether they even do – oil set aside for home consumption never makes it that far, for example. It is also linked to the cost of food, and with it, the security of governments across the globe. 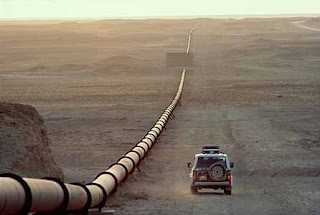